“A Better Life?” is back for a second season as we continue to explore how COVID-19 has changed immigrants’ lives and their relationship to America. This fall, we’ll be sharing new voices, new stories, and new perspectives as we ask the question, “As we navigate out of this pandemic, who gets to return to normal?”

This eight-part series features deeply-reported and sound-rich narrative stories as well as engaging conversations led by host Mia Warren. “A Better Life?”Season II takes listeners to Wyoming, the U.S.-Mexico border, L.A.’s Chinatown, rural North Carolina, and other locations around the nation to explore how immigrants see their lives and the promise of America changing in the second year of the pandemic.

Season II is produced by Quincy Surasmith, a Feet in 2 Worlds editing fellow and the creator of the Asian Americana podcast. Season I producer Mia Warren returns this year as the series host. Contributors to the series include immigrant journalists who trace their roots to Mexico, Guatemala, Indonesia, Peru and East Africa’s Indian community.

“As the country continues to figure out pandemic recovery, we wanted to ask: who gets to return to normal? And who’s decided to change what normal means to them?” said series producer Quincy Surasmith. “We’ve got a stellar team to dig at those questions for ‘A Better Life?’, and I’m excited to share what we’ve found.”

Season I of “A Better Life?” is the winner of the Golden Crane Award for Best Covid coverage from the Asian American Podcasters Association. It also inspired the creation of other podcast series that focus on the experiences of immigrants during the pandemic.

“A Better Life?” from Feet in 2 Worlds is available on all major distribution platforms, including Apple Podcasts, Castbox, Himalaya, Pocket Casts, Spotify, and Stitcher.

Feet in 2 Worlds is supported by The Ford Foundation, the David and Katherine Moore Family Foundation, an anonymous donor and readers like you. 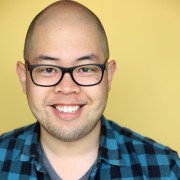 Quincy Surasmith is Fi2W's editing fellow. He is an audio producer based in Los Angeles, California. He is also the host and executive producer of Asian Americana, a podcast featuring stories of Asian American culture and history. Previously, he was the producer-editor for the podcast #GoodMuslimBadMuslim and produced at Southern California Public Radio/LAist.