Arizona’s Fate in the Midterms Depends on Latino Voters

Fi2W · What Arizona Teaches Us About The ‘Latino Vote'

Editor’s note: This is the first in our new series Immigrants in a Divided Country, which explores the current political landscape in the United States from the perspective of immigrants—including voters, and non-voters, citizens, legal residents, and undocumented people.

Karina Ruiz is proud of her faith and her Mexican heritage. She often wears traditional Mexican blouses and jewelry. In the bedroom of her home in Phoenix, Arizona there is a statue of the Virgin of Guadalupe, Mexico’s most revered saint. She also displays the flags of Mexico and the United States, the country she migrated to when she was a young girl.

Twelve years ago when Arizona enacted one of the toughest anti-immigrant laws in the country, Ruiz was terrified. SB 1070, or the “show me your papers” law as it was known, allowed police to stop and question anyone who they suspected of being in the U.S without proper documents. As an undocumented immigrant, Ruiz could have easily been stopped and deported. “If you listened to Mexican music, it was like a cue for police to assume that you could not have … legal status,” she remembers. “The attack wasn’t just on immigrants, it was on Latinx, brown, people of color,” she said.

In this year’s midterm elections, a lot of the political gains of the past 12 years are threatened, and Latino voters could be partly responsible.

The response to SB 1070 was an unprecedented period of Latino political activism. “In Arizona, people had a sense that something had to be done,” Ruiz said. “I remember that people took to the streets and with white shirts as a symbol of peace, we did it. And I remember I had my eight-year-old son going with me to these marches.”

Listen to Maritza L. Felix talk about the growing influence of Latino voters in Arizona on Notes from America with Kai Wright from WNYC Studios.

Since then, there has been a dramatic increase in Latinos elected to state and local offices in Arizona, and the author of SB 1070, Republican State Senator Russell Pearce, was defeated in a recall election. Ruiz eventually became the director of the Arizona Dream Act Coalition, an organization that represents people like her, who were brought to the U.S. by their parents with no clear path to legalization, and were granted temporary legal status under an executive order signed by President Obama.

Ruiz has vowed to never let fear rule her again. But in this year’s midterm elections, a lot of the political gains of the past 12 years are threatened, and Latino voters could be partly responsible.

The Republican candidate for Arizona governor, Kari Lake, has been called the new face of MAGA. She’s a proud election denier, and is unapologetic about wanting to aggressively police undocumented immigrants. Despite that, polls, both in Arizona and nationally, show growing Latino support for Republican candidates. In Arizona, specifically, this trend may partly reflect the fact that the Democratic candidate for governor, Katie Hobbs, has done almost no outreach to Hispanic voters.

Reyna Montoya is the founder of Aliento, an organization in Phoenix that serves undocumented immigrants, DACA recipients (Deferred Action for Childhood Arrivals also known as Dreamers), and mixed immigration status families. Their mission is, “to transform trauma into hope and action.” Montoya also had a political awakening in 2010, when SB 1070 was signed into law. Now she worries that everything that has been achieved since then will come crashing down in the midterm elections.

“I think that even though there’s been some progress made, we’re seeing a little bit about the post Trump wave, how nationalism and anti-immigrant sentiment continues to be on the rise,” Montoya said.

“So I think that right now, what we’re experiencing in Arizona, it’s a little pendulum, right? It’s like it was very anti-immigrant. We saw that wave. We saw the pendulum swing the other way and saw a little bit of progress and more education being done.” “It’s kind of up in the air. We don’t know where the pendulum is going to swing. It’s going to swing to someone like Kari Lake that has very similar policies and ideologies? Or is it going to be moderated?” Montoya wonders.

One third of Arizona’s seven million residents are Hispanic. The National Association of Latino Elected and Appointed Officials (NALEO) estimates that 640,000 Hispanic voters in Arizona will cast their ballots in this midterm election. That represents a growth of 400 percent in the Arizona Latino vote since 2002.

Garcia, 41, was born in Hermosillo, Mexico and came to Arizona at a young age as a youth pastor. He believes that in this election the top priority for Latinos is the economy, not immigration. “I think Latinos will be more focused on job opportunities, because if you have security, your family is happy. Jobs have security,” he said.

The choice may not be that simple. But there is growing awareness that the long-held idea of a homogenous Latino voting bloc, even within Arizona, is outdated. Some Latinos speak Spanish and many more don’t; some just got to the U.S., have dual citizenship or have been living in the U.S. for generations. Some are religious, while others are not.

“I think this is a very Anglo concept. It’s sometimes difficult for [non-Hispanic] Americans to comprehend that Latinos are very different from each other,” said Pedro De Velasco, the director of education and advocacy with the Kino Border Initiative, an organization in Tucson that aids newly arrived migrants.

He notes that Latino voters can feel torn when they look at the positions of some conservative Republican candidates who appeal to their religious values. “Very often we find candidates who present themselves as pro-life because they defend the right of the baby in the womb to be born. However, when we read their approach to immigration, we see that it is restrictive, that is inhumane, that they speak of criminals and invaders and not of human beings,” he said.

Latino voters helped Joe Biden win Arizona in 2020. They were instrumental in the recall of State Senator Russell Pearce, who was replaced by a more moderate Republican, as well as the political demise of Maricopa County Sheriff Joe Arpaio, who became the national face of Arizona’s anti-immigrant laws. Petra Falcón, a fourth generation Arizonan, was part of these efforts. She is the director of Promise Arizona, an organization that promotes Latino voter registration and civic engagement.

“Immigrants are going to play a pivotal role, especially in Arizona.” Falcón says. “There are 63,000 new voters who are going to have a big, big role in what happens in our state.”

For Karina Ruiz, the change represented by the growing Hispanic vote is reflected in her own family. The eight-year-old boy who accompanied her to marches to protest SB 1070, is now 20 and can vote. And so Ruiz, who can’t vote because she is not a U.S. citizen, remains hopeful about the future.

“He is the son of immigrants,” she says about her son. “His girlfriend also tells me that he has already voted because she knows our situation. They vote for their mother and grandmother, they vote for those of us who cannot vote… that is the true Latino vote, a young vote, an informed vote, a conscious vote, a vote that has already had a long life… and we are going to see a change for that reason,” Ruiz said.

This story was produced in partnership with palabra. 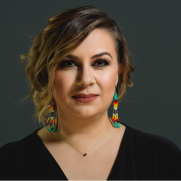 Maritza Lizeth Félix is a freelance journalist, producer and writer in Arizona. She is a Feet in 2 Worlds editing fellow. Her work has been published in major newspapers in the U.S., Mexico and other countries, and broadcast on various television networks. Félix has won five Emmys. In 2012 and 2013 the Phoenix New Times named Félix Best Spanish-Language Journalist in Arizona. Currently, Maritza leads Conecta Arizona, a news service on WhatsApp providing a life-line to Spanish-speakers in Arizona during the COVID-19 pandemic.

What We Gained and What We Lost in Covid