Detroit is Delicious – the FI2W Podcast

Detroit is a culinary destination.  The city is climbing back from a recession and bankruptcy, energized in part by food entrepreneurs, farmers and chefs who have made the Motor City one of the most exciting places to eat in America.

Feet in 2 Worlds is working with WDET, Detroit’s public radio station, to cover food, immigrant cultures and communities of color in Metro Detroit. We’ve awarded fellowships to four journalists who are learning new ways to tell food stories through audio. We’re pleased to bring you their audio postcards, sound-rich snapshots of people and places in Detroit’s food landscape.

This podcast features stories from Detroit’s historic Eastern Market where local farmers, food-makers and sellers open their stalls to the public year-round. We also visit Al-Haramine International Foods, a market in Hamtramck, Michigan that serves a diverse clientele. Cashiers at Al-Haramine make a point of greeting customers in their own language whether it is Polish, Bosnian or Arabic.

Other stories include an Indian food entrepreneur testing new ways to innovate healthy traditional cuisine; a fifth-generation Italian-American market vendor who has been selling produce to retail and wholesale customers for 56 years; and one of the many musicians who perform at the market, a drummer who comes to entertain shoppers and keep himself out of trouble.

The podcast was produced by Rosalind Tordesillas and mixed and hosted by Jocelyn Gonzales. 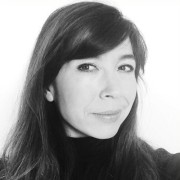 Mei-Ling McNamara is a journalist, filmmaker and academic working in print and broadcast media. Her work has been featured in the Guardian, Al Jazeera English, CNN International and Channel 4. Follow her on Twitter @MLMcNamara

Building Community, One Soul Food Plate at a Time - Fi2W on the Radio