Fi2W on the Radio: Mosques Go Virtual During a COVID-19 Ramadan

For the first time in 25 years, Imam Abdul Latif Azom has closed the doors to the Islamic Center of North Detroit, or Masjid Al-Falah. It’s Ramadan, the month of fasting from dawn until dusk. Masjid means mosque.

“The greatest loss [to] our congregation is we can’t go to the mosque,” said Azom.

Since March 23, when Michigan Gov. Gretchen Whitmer announced a stay-at-home order, Muslims in Michigan have dramatically changed the way they worship. And the need to socially distance has had an especially dramatic effect during Ramadan.

“Masjid Falah is a shelter,” said Azom. “Anything happen with community, people, they ask us. They come to us.”

Read more from Nargis Rahman on celebrating Ramadan during the coronavirus pandemic.

Masjid Al-Falah was founded in 1989. It’s sprawled over a block in Detroit’s Banglatown neighborhood.

Imam Azom says he’s struggling to do daily livestream programming for the Islamic Center of North Detroit, or Masjid Al-Falah, but posts to Facebook occasionally during Ramadan due to COVID-19 closures.

During Ramadan, it feeds 300 families each week with Muslim Family Services. But it’s struggled to offer the kind of robust online programming other mosques have during the pandemic.

Still, Azom is trying. In March, he used the mosque’s robocall system to warn people to stay home.

“Respected community members,” Azom’s recorded voice told his congregation, “may Allah protect you all from this epidemic.”

Azom says he just can’t keep up with a daily livestream. He posts on Facebook occasionally. He encourages worshippers to find their own ways to pray at home. That’s what we’ve been doing at my house. My son recites the adhan, the call to prayer, in our living room. We pray together as a family. We’ve decorated the house with glittery lights and handcrafted paper chains to embrace the spirit of Ramadan at home.

But for many Muslims, the separation, especially during Ramadan, is hard.

Bushra Azom is one of Imam Azom’s daughters.

“The feelings that you get when you’re in Ramadan, which is really hard to describe,” said 23-year-old Bushra. “But it’s just like something that just gets enhanced when you’re with your fellow Muslims in the community, kind of, like, standing together in worship, and without that, I do feel like there’s just going to be, like, an element of sadness.”

“Breaking bread with somebody, you know, people talk about it for ages. Like, that’s just a very amazing feeling. So it does, you know, kind of suck that we’re not able to have that experience with our friends.”

A few miles north, in Warren, is the Islamic Organization of North America, or IONA, where Steve Mustapha Elturk is the imam. He says the mosque caters to a diverse audience.

Imam Elturk calls himself the “candy imam.” He’s known for passing out sweets to children after mosque services

“One morning, praying Fajr, the dawn prayer, I counted 11 different nationalities of the 13 congregants that were present.”

Since social distancing became the norm, IONA has ramped up its programming on YouTube, Zoom, Facebook, Instagram, and even WhatsApp. IONA has always been pretty tech-savvy.

Laila Prescott is one of the “book ladies” at IONA’s Mommy & Me program, a playgroup for moms and kids under five. Since the pandemic, she’s been sharing stories on the group’s WhatsApp thread.

Prescott converted to Islam in 2005. As a new Muslim, she went to the mosque every day during Ramadan. It was her way to learn the customs and practices of Islam.

“Alhamdulillah, the children and I always watch like children’s Islamic YouTube videos together, maybe for 10-15 minutes every day. But I don’t really want them stuck in front of a screen all day long.”

As Ramadan ends, both mosques must prepare for Eid Al-Fitr services on Saturday, May 23rd. While IONA is planning a Zoom service, Masjid Al-Falah is holding out, hoping that an in-person gathering will somehow be possible. 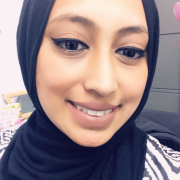 Nargis Rahman is a Bangladeshi-American Muslim writer and a mother of three. She is passionate about community journalism in the Greater Detroit area and about giving American Muslims and people of color a voice in today’s media. A former journalism fellow for Feet in 2 Worlds/WDET 101.9 FM, her work has appeared in Haute Hijab, Eater, Detroiter Magazine, The Muslim Observer and others.

On Being in the Room Where It Happens - Fi2W, 15 Years Ago and Today