Camilo Godoy is not afraid of making people uncomfortable. Camilo, an artist and political activist, creates art that forces people to interact with issues that are at the forefront of much of his work – immigration and LGBT and HIV justice.

“Right now I am working on a series of small sculptures that function as bars of soap and are made by mixing lavender and HIV positive semen and etched with the codes of laws that specifically criminalize HIV,” explained Camilo. Only after participants have washed their hands are they informed of the soap’s contents.

“I am interested in that moment of creating dialogue, where we are forced to talk about issues that I care about and that matter,” he says.

Camilo hopes to install the bars of soap in public restrooms, where he thinks conversations about HIV and its criminalization should been encouraged.

For Camilo, politics and art are inseparable. “I’m very interested in the way those two practices intersect and how they can learn from each other,” he says.

His most recent project titled “Global Ranking (2012): 74 and 4” consists of a lenticular card that combines his passports from Colombia and the United States to investigate and examine the different global rankings Camilo occupies as a dual citizen of the two nations. As a citizen of Colombia he is allowed to travel visa-free to 59 countries, giving him a global ranking of 74. As a U.S. citizen his global ranking based on the freedom of travel is 4, allowing him to travel visa-free to 166 countries.

In a similar project, Camilo will be taking passport photos of a diverse sample of people and color-coding them based on a global ranking system. With this project he hopes to expose some of what he believes are the unjust differences between people based on the place where they were born.

“I’m interested in people really participating in a work of art and understanding their own identity in relationship to the topic, and not just as something that we stare at and look at but something that is lived,” he says.

Camilo credits his childhood as a source of inspiration for much of his creative and political work. Originally from Colombia, Camilo immigrated to the United States when he was 10-years-old. He spent his formative years in a New Jersey immigrant community where the majority of his high school classmates were Latino. He graduated from The New School in New York in May of this year.

Growing up, the bathroom in Camilo’s house also served as a dark room. His father worked for Kodak. Around the house he would see tanks of chemicals and knew what an enlarger was. “I use to take pictures a lot when I was a kid,” he says.

Recently Camilo presented a book he has been working on, printed with HIV positive ink and consisting of the 34 HIV criminalization laws in the U.S. “In an era where you can literally find a sexual partner using a smartphone app, it’s a shame we are not talking about the HIV and AIDS crisis, which are not over,” Camilo laments. 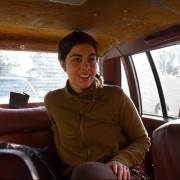 Mica grew up in the San Francisco Bay Area where she has organized around immigrant, day laborer and LGBT rights. She is currently a Global Studies student at The New School writing her undergraduate thesis on the intersection of LGBT and immigration politics within activist organizations. She graduates May 2013.