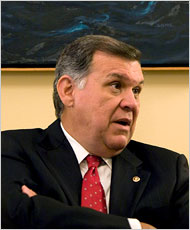 Sen. Mel Martinez (R-Fla.) announced Tuesday he will not be seeking reelection to a second term in 2010.

Coming after dismal results for his party among Hispanic voters both in Florida and nationwide, his decision bolsters the sense of a growing gulf between Latinos and the Republican Party.

Martinez “was seen as vulnerable in a state that has been tilting Democratic, particularly among Latinos,” The New York Times said. After decades of staunch Hispanic support for Republicans in Florida, this year 57 percent of them chose Democrat Barack Obama over John McCain.

“The GOP should find the Hispanic defection in Florida particularly troubling,” wrote Sun Sentinel columnist Kingsley Guy. “Historically, Republican presidential candidates have carried the Hispanic electorate, for years dominated by Cuban-Americans who supported the GOP’s tough-on-Castro policies. Attitudes are changing, however.” The main reason for the low level of Hispanic support, he added, was the virulent debate on immigration reform, which “soured Hispanic voters on the GOP.”

Paradoxically, despite having supported comprehensive reform of immigration laws, Martinez — a Cuban who arrived in the U.S. at age fifteen — appears to have been at least partly a victim of that souring.

Martinez worked with a bipartisan coalition — including John McCain and Barack Obama — who wanted to draft a compromise.

They did — and Martinez got creamed for it.

… Ironically, it was a profile in courage — a willingness to look for a compassionate compromise in the charged immigration debate — that ultimately did Martinez the most damage.

With Martinez’s departure from Washington, the Republicans will lose a high-profile Hispanic figure at a time they can least afford to do so: the moment for trying to win back the fastest-growing segment of the American electorate.

One road to Hispanics’ hearts is the risky path that goes through Congress and immigration reform. Frank Guerra, who advised the McCain campaign on Hispanic media issues, told HispanicBusiness.com the GOP has to resolve the issue: “And it needs to be done in a way that does not alienate Hispanics who are here and who are voting.

“Because if they don’t turn that sentiment around,” Guerra said, “they will continue to get this kind of low margin in the vote.”

Now that he’s not constrained by a need to be reelected, Martinez could help his party start that turnaround, a Florida editorialist argued Tuesday.

Sen. Mel Martinez’s decision not to seek re-election should not stall future efforts to reform our nation’s immigration system.

He should take his final two years in office to push for reforms that should have been enacted years ago.

…Martinez should not spend his final years in the Senate as a lame duck.

He should become the conscience of Congress on this issue and push the incoming Obama Administration to make this a priority.