For Gay Hispanics in the U.S., “Se Pone Mejor”

In the midst of a 9.8 percent unemployment rate and the worst economic recession since the 1930s, U.S. Secretary of Labor Hilda Solis has taken time to advocate for Latino LGBT rights.

Labor Secretary Outlines Policy Toward Immigrant Workers in the Gulf

On a visit to Louisiana, U.S. Labor Secretary Hilda Solis said the federal government plans to protect workers’ rights during the oil spill cleanup – regardless of their immigration status.

As soon as she took office Friday, Secretary of Labor Hilda Solís moved to reverse a rule affecting guest farmworkers that former President George W. Bush had modified in his last days in office.

Solís had been among the many critics of Bush’s decision, which was made in December but went into effect Jan. 17, three days before President Barack Obama was sworn in. At the time, then-U.S. Rep. Solís issued a statement calling the Bush rules “just the latest example of how out of touch the president is with working families, especially with Latino families that make up a large portion of the farmworkers in this country.”

On Solís’ first day in office, the Labor Department announced in a statement “the proposed suspension for nine months” of the rule. Solís said in the release:

Because many stakeholders have raised concerns about the H-2A regulations, this proposed suspension is the prudent and responsible action to take.

Suspending the rule would allow the department to review and reconsider the regulation, while minimizing disruption to state workforce agencies, employers and workers.

END_OF_DOCUMENT_TOKEN_TO_BE_REPLACED

Solís Confirmation Hits Another Snag: Obama's Cabinet Could End Up With Only One Latino Member

While her would-be successors are already lining up in Los Angeles, the confirmation of U.S. Rep. Hilda Solís as the next secretary of labor has been held up in the Senate, apparently due to her husband’s tax problems. 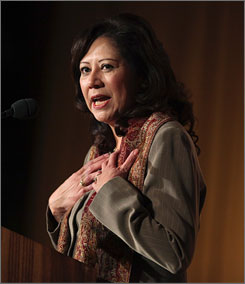 As Feet In 2 Worlds noted in December, Solís was one of the three big hopes for Latinos who are looking for greater representation in Pres. Barack Obama’s cabinet. Of the other two, former Sen. Ken Salazar, the new secretary of the interior, is the only one who has been confirmed. New Mexico Gov. Bill Richardson withdrew his name from consideration as secretary of commerce over a federal investigation into his administration’s dealings with a consulting company.

Solís, the 51-year-old daughter of a Mexican father and a Nicaraguan mother, is the latest Obama nominee to have to explain unpaid taxes — although the problem does not arise from her own taxes, unlike the cases of Secretary of the Treasury Timothy Geithner, and the former nominees for secretary of health and human services, Tom Daschle, and White House chief performance officer, Nancy Killefer.

The would-be labor official’s problems started after USA Today revealed Thursday there were 15 outstanding tax liens against Sam’s Foreign and Domestic Auto Center, a company owned by Solís’ husband, Sam Sayyad. A hearing by the Senate’s Health, Education, Labor and Pensions (HELP) Committee was postponed Thursday afternoon to give the administration time to look into the tax matter and report back to the committee, according to the newspaper.

END_OF_DOCUMENT_TOKEN_TO_BE_REPLACED

In Hilda Solís’ L.A. District, A Congressional Race Is Already Heating Up

The delay in Congresswoman Hilda Solís’ confirmation as secretary of labor hasn’t kept two ambitious politicians from racing hard to replace Solís as the U.S. representative from California’s 32nd District in Los Angeles.

There is no official election date yet –it has to be set by the governor after the seat is vacated–, but there has already been some drama and controversy behind the scenes between State Sen. Gil Cedillo and Board of Equalization Vice Chair Judy Chu.

First, the potential candidacy of another Latina, State Sen. Gloria Romero, spurred talk of a division in the vote that would cause the loss of a seat that a Latino has held for about 25 years.

But Romero decided instead to focus her ambitions on an obscure race for School Superintendent of California that she had planned beforehand.

Some suggested there had been pressure to get Romero not to run for this seat, and that Hilda Solís herself was behind the effort to get her long-time political ally Judy Chu to succeed her. Solís has not officially endorsed anyone, but it’s widely known that Chu and her have been tight and have supported each other’s campaigns for many years.

END_OF_DOCUMENT_TOKEN_TO_BE_REPLACED

With Hilda Solís At Labor, Obama Rounds Out Latino Contingent in his Cabinet

On the heels of a much-criticized decision by the Bush Administration to change the H-2A guest worker program, it looks like one of the public officials who spoke against the change is headed to be the new secretary of labor.

California Rep. Hilda Solís, the 51-year-old daughter of a Mexican father and a Nicaraguan mother, was signaled yesterday as President-elect Barack Obama’s choice for the labor position.

The Associated Press reported that Obama plans to make the designation official today,

Unions, which contributed heavily to Obama and Democrats this year, expect Solis to be an advocate for them and for workers. They expect her to press for legislation that would force businesses to recognize union representation once more than 50 percent of a company’s eligible work force signs union cards, instead of waiting for secret-ballot elections.

Solís becomes the third high-profile Latino official to join the Obama Administration, after the designations of New Mexico Gov. Bill Richardson as secretary of commerce and Colorado Sen. Ken Salazar as interior secretary.