Lessons from Binghamton (and Maybe a Ray of Hope for Immigrants): News Analysis from FI2W

The tragedy that unfolded on Friday in an English class for immigrants at the American Civic Association in Binghamton, N.Y., was horrifying and brutal. But along with the shock and sadness there is also an opportunity to see where we are as a nation, where we have come from, and where we may be going next in our long immigration history. 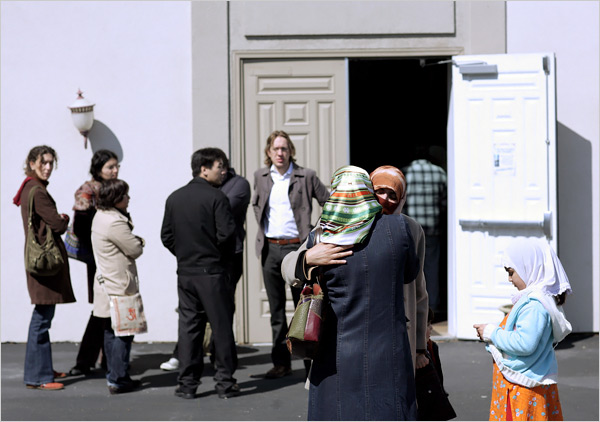 Mourners at a service for immigrant victims of the Binghamton massacre. (Photo: The New York Times)

Binghamton is in mourning. On Sunday night 1,500 people gathered at a middle school in the small city in upstate New York to remember the victims of the massacre in which 14 people died, most of them immigrants. Local TV reports showed prayers being offered in several different languages, and a diverse crowd of mourners, standing together, holding candles outside the school on a cool April evening. More memorials are planned for later this week.

The victims came from around the world — Pakistan, Haiti, China, Brazil, the Philippines, Iraq, and the U.S. The gunman, 41-year-old Jiverly A. Wong, was Vietnamese.

We now know that Binghamton is a mirror of the nation. The city’s immigrant and refugee population –small compared to that of metropolises like New York, Chicago and Los Angeles– has grown in size and significance over the past 20 years. The mix of cultures, languages and religions represented by the victims of Friday’s tragedy can be found in any number of small cities and towns across the country from Siler City, N.C. to New Haven, Conn. to Manchester, N.H.