Why Can’t a Mosque Be a Sanctuary?

In this commentary Zahir Janmohamed discusses the complexities of this question for American Muslims in the current political climate.

At the entrance of a mosque in suburban Oregon, a 50-something-year-old Muslim man noticed my DSLR camera dangling from my neck and approached me. I put my hand out to greet him and asked him his name, but he recoiled.

The problem, he explained, is that I had been photographing the wrong things.

“I watched you taking photos of the food, of people eating, of kids playing basketball,” Ahmed said.  He recognized me from my visit to this mosque a few weeks ago. I was working on a story about the foods Muslims eat during the Islamic month of fasting known as Ramadan, for The Racist Sandwich, a podcast I co-host about food and race.

He gently touched my shoulders and turned me in the direction of a newly installed display window at the mosque.

I had actually come to the mosque that day for another reason; to ask him and others in his congregation, if this mosque—and others like it—will join the growing movement of religious centers in the U.S. that have declared themselves to be sanctuary sites for refugees and undocumented individuals.

I did not have the heart to ask him that question. Weeks earlier, according to him, the mosque had received death threats, as its members prepared to mark the beginning of Ramadan. No one in the mosque reported the death threats, he told me.

I removed the lens cap from my camera and began taking photos of the American flags on display. Ahmed smiled, complimented me in Urdu, and then switched back to English.

“This is why we need Muslim journalists like you,” Ahmed said, beaming. “You understand that right now, these are the stories we need right now—stories that show that we are just like everyone else.”

A few weeks later, I tried my luck again. I went to another mosque in Oregon, a multi-million-dollar building so fancy it has glass basketball hoops that retract from the ceiling. This time, I asked Muslim worshippers if that mosque would declare itself a sanctuary congregation as so many other religious sites have done since the election of Donald Trump.

It did not seem like an unreasonable question. After all, Oregon’s Governor, Kate Brown declared Oregon to be a sanctuary state back in January and the Oregon State Legislature just passed a bill to expand the state’s sanctuary status. But my question about sanctuary fell flat there too.

“We actually have lots of non-Muslims who come here,” an older Muslim woman said to me, who, like nearly everyone I interviewed, insisted that I do not include her name. She pointed out the mosque now has chairs for people to sit on, a contrast to the usual arrangement where everyone sits on the floor. “Non-Muslims are more comfortable this way,” she added.

For her, the definition of sanctuary had little to do with protecting refugees or undocumented immigrants. It was about making mosques more welcoming to non-Muslims who may have misunderstandings about Islam. “Absolutely, we should be a safe space for all, a sanctuary as you call it. We need to show that the mosque is a modern place, that we are not backwards as people say we are,” she said.

Others were puzzled by my question and added that I, as a Muslim, should know better.

A volunteer at the Ahmadiyya mosque in Portland demonstrates to non-Muslims how Muslims pray; photo: Zahir Janmohamed

“Bro, how you going to let people hide in the mosque when we ourselves aren’t sure if we are safe in here,” a 15-year-old boy said to me. He pulled out his iPhone and showed me all the anti-Muslim comments he gets on Twitter each time he posts about his faith.

Mohamed Alyajouri, the outreach director at the Muslim Education Trust, was one of the few people I interviewed who agreed to be quoted on record. Alyajouri, a Yemeni immigrant, was recently elected to the Portland Community College Board of Directors, making him perhaps Oregon’s first elected Muslim immigrant. Alyajouri reminded me that many of the congregants at his mosque came to the U.S. as refugees, but that sanctuary status would be difficult for the mosque to declare.

“We want to get there, but it’s tough,” he said. “I support the movement. It’s a good thing, but right now we have to make sure that we feel safe in our mosques first.”

Alyajouri has a point. According to the FBI, anti-Muslim incidents rose 67% in 2015. More distressing, perhaps, is that there appears to be no pattern to these attacks. They have occurred in solidly blue Democratic cities, as well as in red, Trump-loving Republican towns. Most of the anti-Muslim assailants have been white, but others have been people of color, too. Some who target Muslims are college-educated, including one anti-Muslim attack on a mosque in Davis, California that was committed by a UC Berkeley graduate.

What makes conditions in mosques worse is the fear many Muslims have of being under surveillance, especially after it was reported that the New York Police Department was tracking mosques and students groups. Subsequent initiatives like the federal government’s Counter Violent Extremism program continue to be criticized by civil liberties groups and young Muslims who feel stigmatized, targeted and under surveillance. I experienced this nervousness myself in 2016 when I began reporting about the mysterious killing of Abdul Jamil Kamawal, an Afghan American man who was beaten to death by a white man outside his home in Portland. Kamawal was considered a pillar of Oregon’s Muslim community and many of his friends told me they suspected he was killed because of his faith. A 27-year-old white man has been charged, but it is not being treated as a hate crime.

As I began asking questions about Kamawal’s death, some Muslims advised me to drop my story. I pushed back and said that as a Muslim I understood them.

One of the mosque volunteers insisted I had it all wrong.

“If the U.S. government wanted to spy on us,” he said, “Would they really send a white guy named Michael or a brown guy named Zahir? It would be a guy named Zahir. That’s the thing. We don’t even trust each other in the mosque any more.”

But what happens when a mosque in the U.S. does declare itself to be a sanctuary congregation? On January 18, two days before Trump’s inauguration, a mosque in Cincinnati, Ohio did just that. It vowed to protect undocumented immigrants, as well as to provide shelter for refugees. A few weeks later, it had to reverse its sanctuary status after it received more than 40 death threats.

But that is not really what makes my student days so different from the Muslims I meet on campus today. I never feared I would be killed for going out to eat. I never worried someone might attack me for praying in public or in a mosque, or be spying on me.

The tragic thing is that it wasn’t always this way in America. Many years ago, when I was a student at UC Berkeley in the mid 1990s, my friends and I had a tradition during Ramadan. We would meet at the mosque near campus and ride our bikes to Denny’s for the pre-dawn meal called suhoor. Back then, we had pedestrian worries: Eating too much fried food at 4 a.m., getting flat tires, forgetting to pack our compasses in case we decided to pray under the open sky at the Berkeley Marina.

Now when I meet other Muslims, especially young Muslims, and they ask me what it was like going to college, in their words, “so long ago,” my tendency is to explain my age by citing technology references. Oh, we had pagers in those days, not iPhones.

But that is not really what makes my student days so different from the Muslims I meet on campus today. I never feared I would be killed for going out to eat. I never worried someone might attack me for praying in public or in a mosque, or be spying on me.

I do not admit this often, but I have come to view the sanctuary movement to be, in some ways, disingenuous and incomplete. I have interviewed Somali families in Portland who told me they have been denied housing because they face both anti-black and anti-Muslim discrimination. I have not suffered that indignity, but I do think twice about booking an AirBnB rental under my unmistakably Muslim name and instead prefer to use the name of my partner, a white American woman.

Indeed the very story I set out to do last month—on Ramadan foods for my podcast—had to be shelved after several Muslim restaurant owners told me they did not feel comfortable speaking about the anti-Muslim sentiments they face.

If this seems like an exaggeration, consider this: in Galveston, Texas, a Muslim restaurant owner said he is closing down his business after receiving threats. I am not at all surprised. Each time I tweet about Islamophobia from our Racist Sandwich Twitter account, we lose followers, even if the Tweet in question is about food.

Those who advocate for sanctuary status seldom speak about how, for many Muslims, the very act of attending the mosque has been stripped of some of its joy, in part because of the attacks against mosques, but also because of the respectability politics Muslims are expected to perform within the mosque.

And yet despite this, in discussions about creating sanctuary spaces, we rarely discuss these consequences and instead resort to slogans that leave me feeling frustrated and mistrustful of the sanctuary movement.

Because from what I have observed, those who advocate for sanctuary status seldom speak about how, for many Muslims, the very act of attending the mosque has been stripped of some of its joy, in part because of the attacks against mosques, but also because of the respectability politics Muslims are expected to perform within the mosque: don’t talk about politics.

No, actually, condemn this news story. Speak against Trump. Declare yourself a sanctuary like we have done.

It is not just maddening. It is downright humiliating.

These days, I am often invited to panel discussions where well-intentioned liberals ask me if mosques will join the sanctuary movement. I usually evade the question, because I have learned that my answer never really suffices. But a few weeks ago, I tried something different.

I shared a story of a Muslim restaurant owner in Oregon who confided in me that he too was thinking of closing his restaurant after his business was hit by a gruesome—and costly—anti-Muslim attack.

Would we, I asked the audience, be willing to expand our definition of sanctuary to ensure that Muslim-owned businesses like his could survive? That Muslims could eat dinner in public without the fear of being assaulted?

Before anyone in the audience could answer, the moderator—himself a person of color like myself—said it was an important issue and then added with nary an apology, that it was not really the focus of my panel presentation.

Read More stories from our magazine, Is It Safe Here? Redefining Sanctuary In The Trump Era 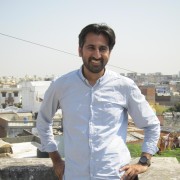 Zahir Janmohamed is a freelance journalist and the co-host of The Racist Sandwich, a podcast about food, race, gender, and class. He is also the Policy Director at the Asian Pacific American Network of Oregon, as well as a 2017 Kundiman fellow.